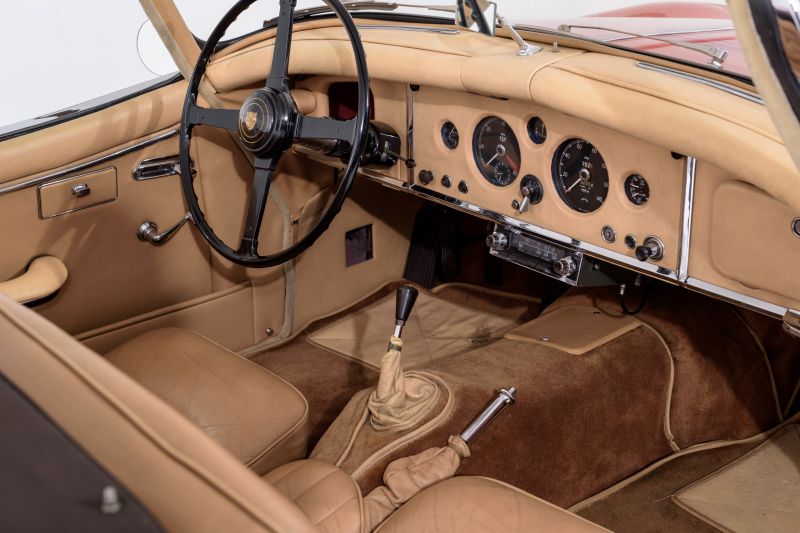 The Jaguar XK series was launched in 1948 with the XK120 and was an international sensation from the beginning. The final iteration of the original XK arrived in 1958 as the XK150. The car was significantly restyled and was a more refined and capable car than its predecessors. The XK150 is easily identifiable by its higher scuttle and door line, wider grille and improved interior space.

A one-piece windscreen replaced the split screen and on the Roadster the windscreen frame was moved back to make the bonnet longer. The widened bonnet opened down to the wings. The big step forward for the XK150 was the adoption of disc brakes, which Jaguar had developed with Dunlop. However, the XK150 retained much of the mechanical layout of the XK140 sharing the same 3.4 litre DOHC Jaguar straight-six.

This Jaguar 150 roadster was delivered new in the USA in March 1959 to her first owner in the color Pearl Grey with Red interior. The car is equipped with a 4 speed manual transmission with very rare overdrive !

Documents from the ’90 ‘s show that the owner was living in California. Taking the quality of the bodywork into account, it can be assumed that the car has been in California all its life. In that period, the car was resprayed in the beautiful color Signal Red and the interior was changed to Beige. The convertible top is black.

In 1999, the XK150 Roadster was shipped to the Netherlands and has a Dutch registration since. The current owner bought the car in 2002 and invested Euro 5.000,- on technical improvements after buying the XK150. Noble House was responsible for maintenance and in 2005 the owner decided for an extensive overhaul by Noble House. The total investment in that period was around Euro 85.000,- (excl. VAT) containing:
– An extensive overhaul of the 3.4 L engine,
– Improvements on the fuel system, exhaust, front- and rear suspension, etc. ,
– Brake system has been upgraded to a later model XK150 (calipers, cylinder, pads, etc),
– Repairs of electrical wiring where necessary, replacing wiring looms etc,
– Repairs on the heating system,
– Replacing all rubbers on doors, lights, bootlid, etc,
– Cleaning of the underbody and apply an underbody coating,
– New carpet set.

Additional documentation provided with the car includes photos of attended concourses in the US (including reports), restoration photos and invoices. Since its reconditioning in 2005, this Jaguar has not covered many miles. The XK150 is always properly stored by the owner and has had its maintenance over the past years.

The car’s odometer shows barely 30,300 miles . She is equipped with a period correct AM radio.

These Roadsters are iconic in their design and are one of the most beautiful of all Jaguars built.

Margin car. This vehicle is sold “as-is” with no warranty, written or implied. The vehicle listed is described to the best of our ability and to our knowledge the above information is accurate. We are not responsible for errors in our description of options or any other details. The listed vehicle is used so we do welcome all local pre-purchase inspections in order to verify the condition. 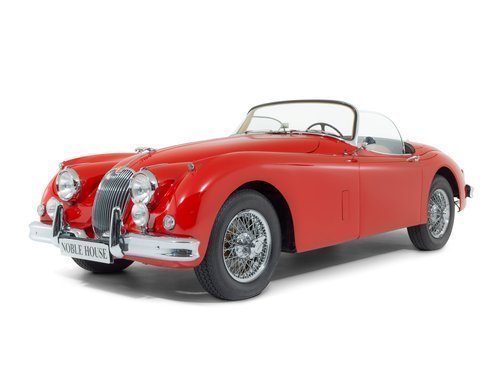